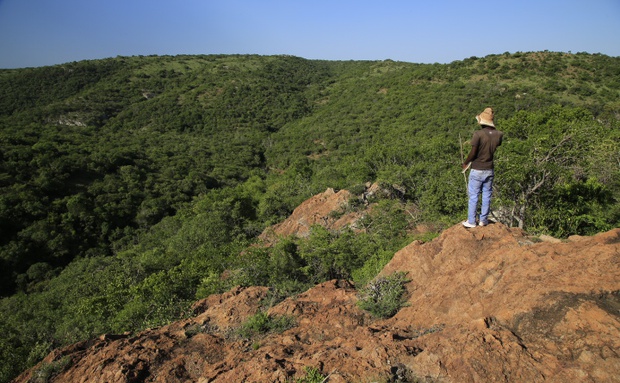 The Mhlumeni Camp is not at Mbuluzi Game Reserve but is instead situated on Community owned land within the Lubombo Conservancy (LC) of which we are a part of.
In 2017 the Mhlumeni community was engaged through the Lubombo Conservancy and they agreed to add to it, put aside a beautiful part of their land and start protecting the biodiversity within in it. In support of this a well positioned tented camp and campsite was build in this stunning landscape to help with the financial sustainability of the small reserve.
Mhlumeni is situated on a gently undulating plateau atop of the hugely biodiverse Lubombo Mountains overlooking the dramatic Mhlabashana Gorge and has magnificent views over the Mozambican Coastal plains to the North- East and Mlawula with the Eswatini Lowveld to the west. The community is almost entirely bordered by Mlawula Nature Reserve. This area has outstanding hiking and great cycle touring. Access to the community and camp is just of the road between the town of Siteki and the Mhlumeni (Goba) border to Mozambique.

The facilities include a central kitchen and dining area for self catering and socializing along with a great fire pit on the deck with absolutely stunning views. Nearby are 4 privately situated luxury tents each housing a set of three twin beds and a deck with a great view.

As well as the tents there is a lovely campsite for people to set up their own tents and camping equipment.

The camp has a very functional and clean ablution block with hot water showers for both the campsite and the tents.